MakeWar is a punk rock band formed in Brooklyn, New York by singer and guitarist Jose Prieto, bassist Edwin Santacruz, and drummer Greg Taylor. The three formerly played together as Sad and French, which started in 2012 as Jose’s solo acoustic project. After adding Edwin on upright bass the duo started touring as Sad and French to promote their First acoustic LP of the same title. The duo then added Greg on drums, plugged in their guitars, and started playing faster, louder songs as a trio. The three have since shared the stage with great bands like, I Am The Avalanche, Banner Pilot, The Flatliners, The Holy Mess, Chumped, Arliss Nancy, Drag the River, John Snodgrass, Joey Cape, Cory Branan, Austin Lucas, and many others. Not wanting to pigeon-hole themselves into only writing breakup songs (and perhaps helped along from the catharsis of literally playing thru and past the deeply honest and personal subject matter of their Sad and French self-title) the trio renamed themselves MakeWar. Not merely a change in name, this seems more of a change in the bands overall sound and even its very philosophy, which has become a more empowered and aggressive approach to life’s little miseries. Before moving on to writing their new upcoming record, MakeWar recorded the previously acoustic Sad and French LP as a full electric three piece. 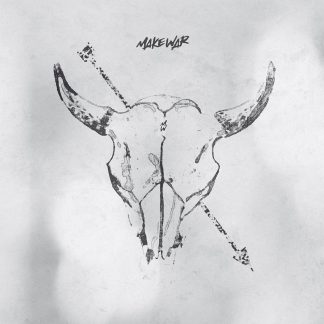