These three Irish lads originally come from around Belfast/Northern Ireland but they moved to Newcastle, England to get shitty jobs and form a band. The jobs did indeed turn out to be shitty, but the band turned out great! The youngsters hammered away at the songs and their rowdy music quickly drew friends and fans to the party. They sold out their first hometown show and figured it was time for their first proper release, and that’s when we got involved. “Ride The Storm” is 10 tracks of rock-influenced punk that remind us of bands like Alkaline Trio, The Flatliners, and Millencolin. There’s Gaelic folklore, drinking songs, and nautical themes throughout this debut album. We at Red Scare love discovering promising young bands from weird places and bringing them to the rest of the world, and we have another winner with Good Friend! TRACKLIST: 1. Rock Bottom Revival 2. D.L.B. 3. Overloading the Limiter 4. The Curious Case of Hy-Brasil 5. The Return of Fionn and the Fianna 6. Curse the Name 7. Young Blood 8. Daniel O’ D and the Moonshiners 9. Bar Flies 10. Irish Goodbyes 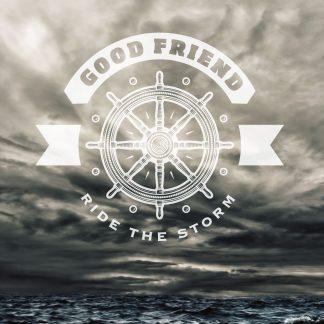