This is a special and very important release for me. everybody who knows me knows how much I love this band and I always wanted to have The World/Inferno Friendship Society #1. So I asked Jack if he would have one somewhere and he answered that he had a bunch sitting in his parents basement. I asked him ever since if he could bring me one the next time he would be there .. but it never happened. I was in New York working Merch for them at one show around 15 years ago or something and they had 1 copy and they did some sort of lottery.. but believe it or not someone stole the 7inch and by the end of night I still wouldn’t have a copy. So I asked Jack in 2019 if there would be a chance for me to do a repress of the record to finally get a copy of it for myself. It’s sad that Jack is no longer with us to be part of this release. The Metal Version is something we did especially for Jack, and it was supposed to be a surprise/joke. To a great Friend and Musician, great Members of a great Band, great Songs , great Tours and great Memories: Here it is again World/Inferno Friendship Society #1!

We decided to lock in the 26th of November as it’s official Release Day. The day it got released originally in the 90s.

This Is A Pre-Sale Release Date 26th. November!

Half of the Pressing will be sold in the USA through the band! if you want to safe on shipping and live in North America watch out for posts by the band! 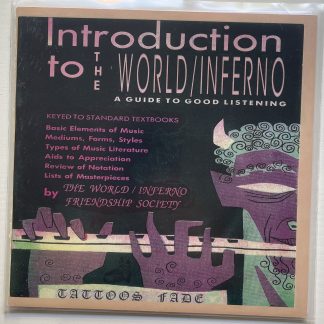